Donika Prela is hoping for political support for her career, just a few weeks after the Supreme Prosecutorial Council refused to give her the okay to be promoted as part of the SPAK Special Prosecution.

The Serious Crimes Officer, who in her inactivity has best served government exponents to “escape” problems with criminal law, is now aiming to be named prosecutor at the Appeal or Prosecutor General’s Office.

The Law on Prosecution, the Law on SPAK, and the Rules of Procedure of the High Prosecutorial Council provide the same principles and criteria for prosecutors’ career  promotion.

The Supreme Prosecutorial Council (KLP), while reviewing the candidacies for SPAK, emphasized that the selection of prosecutors who would be part of the Special Anti-Corruption Structure is the same as that of promotion.

At the conclusion of the process, the LAC selected 15 SPAK candidates, with the main missing being that of Serious Crime leader Donika Prela, who, although running, was not evaluated for being part of the special investigative structure.

In this way, the Supreme Prosecutorial Council, in July 2019, rejected Donika Prela’s request for “promotion”.

But the current Serious Crimes Officer does not seem to give up on the constant demands for promotion.

She already intends to be appointed as a prosecutor at the Appeal level or at the central institution of the Prosecution, although her professional skills were not considered sufficient to be part of the promotion in the SPAK.

Donika Prela has been in charge of Serious Crimes since May 2018, following an unjustified ruling by her friend, Interim Chief Prosecutor Arta Marku.

Prela was able to be confirmed on duty by the first level of Veting, despite numerous problems in all three criteria – wealth, personal integrity and professional skills.

The Public Commissioner appealed the confirmation decision in office, taken by the Independent Qualification Commission, in February this year. Currently, Donika Prela is awaiting a date for her case to be considered by the Special Appellate Panel, the second instance of Veting.

At the head of Serious Crimes, Donika Prela is considered the main culprit for the failure of a series of investigations against senior government officials.

Under her direction, the investigation into the “339” file, which identifies links between criminal groups with high majority exponents of stealing / buying votes in the 2017 general elections, has been banned.

Also, Donika Prela is one of the people who signed the “degeneration” of file “184” in Diber, in an attempt to rescue a lot of senior government officials who were allegedly involved in a mechanism to secure votes for the Socialist Party , illegally, during the 2016 local elections in Diber.

Under the direction of Donika Prela, the investigative group on the “Tahiri” case came under pressure, greatly reducing investigative actions against the former interior minister on charges of narcotics trafficking and co-operation with “Habilaj” criminal group.

Following these “services” in favor of the ruling majority, Donika Prela aims to provide a “promotion” to the Supreme Prosecutorial Council, made up of majority members elected by the Socialist majority or people close to her friend, the Provisional Chief Prosecutor , Arta Marku. 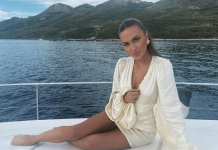