KLP report / During 2019, 5 prosecutors asked for protection. The General Prosecutor’s Office has not conducted any disciplinary investigation

During 2019, 5 prosecutors sought to defend themselves, arguing that they felt threatened while on duty.

Two of the prosecutors who have been defended are part of the Special Anti-Corruption Prosecution that should investigate officials and former senior officials and members of criminal groups.

According to data published in the annual report of the High Prosecution Council to the Assembly, another concern is the lack of facilities, the limited number of staff, and the lack of inspections or disciplinary investigations in the ranks of prosecutors.

According to the KLP, during 2019, 52 prosecutors left and this has caused problems in the functioning of the prosecution body.

“In the structure of the prosecutorial system throughout Albania, a total of 336 prosecutors are planned for the needs of the system. Meanwhile, their actual situation results in 284 prosecutors until 31.12.2019.

The difference of 52 prosecutors shows the vacancies in the system that have come for several reasons, among the most important and that have significantly affected to the work of prosecutors is the resignation as a result of the transitional reassessment of prosecutors by KPK and KPA bodies,- is said in KLP report.

According to the KLP report, during 2019, 280 denunciations of violations committed by prosecutors of all levels arrived at the address of the High Prosecution Council and 38 of them were referred to the General Prosecutor’s Office.

The report states that from January to December 2019, the General Prosecutor’s Office did not conduct any disciplinary investigations against prosecutors. 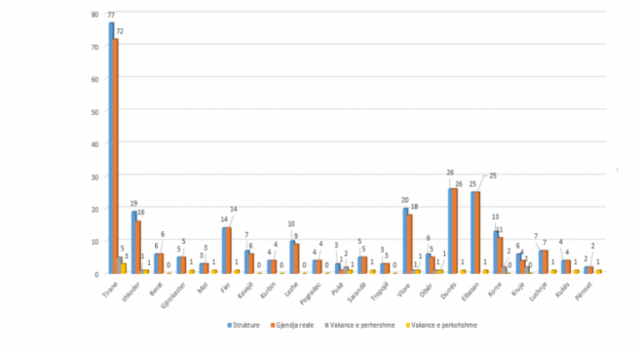